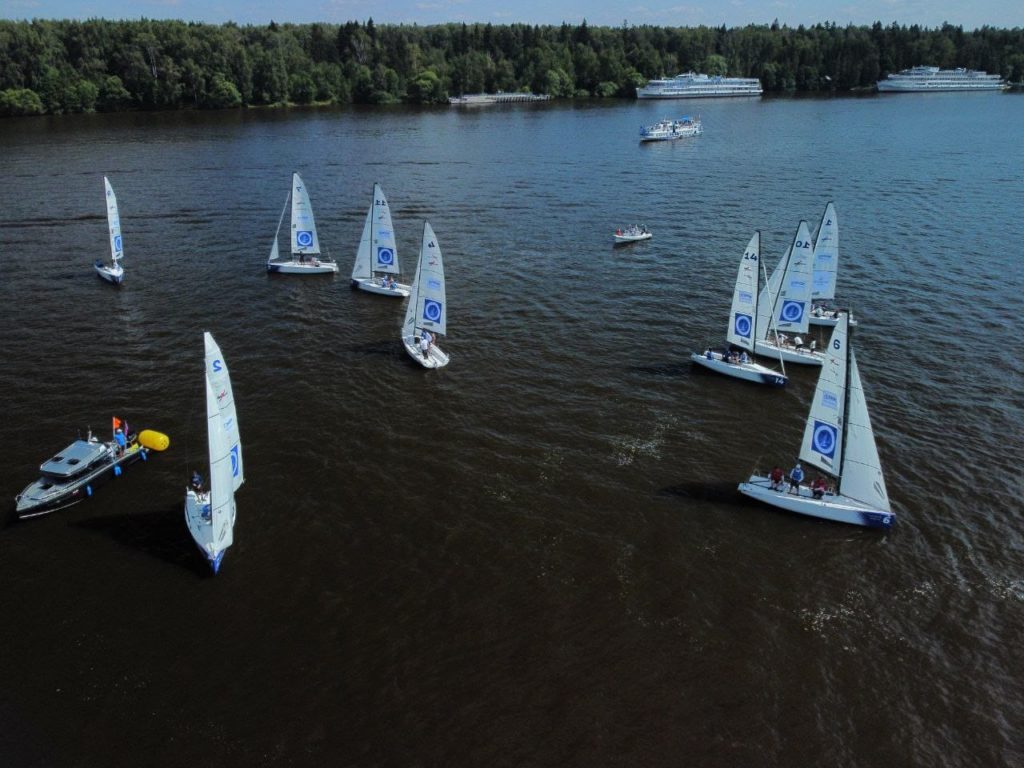 The second stage of the series of sailing regattas – the open Cup “Tenzor International Cup 2022” ended on July 24 in the Moscow region with a brilliant victory of the Serbian team ZIDart Sailing Team.

The regatta was held at the Tenzor Sailing Club yacht club with the support of the Russian Sailing Federation and the title partner of the regatta – the financial and legal group of companies Tenzor Consulting Group.

Three racing days were filled with bright uncompromising struggle of 22 strongest sailing teams. Weather conditions changed every day, as well as the rating of the intermediate leaders, which introduced an element of intrigue and unpredictability until the very end.

On the first day, the weather favored the yachtsmen – a fresh wind of 10-12 knots with gusts up to 16-18 allowed 8 races to be held. Zoran Paunovich’s ZIDart Sailing Team took the lead of the day, ahead of the nearest rivals – the ELF/Hubex teams of Sergey Sobolev and Kalina Racing Team of Anastasia Kalinina. The winners of the first stage of the series – the team of “Russian Bogatyrs” Igor Rytov – unexpectedly got into the outsiders of the day: two false starts, unsuccessful arrivals and only the 13th position in the ranking.

The second race day was held in contrast – with the sultry heat and changeable wind, which in the afternoon switched to the “windless” mode. There was a change of leader in the rating of the regatta. The team of Eyed Mushrooms opened the day with a victory and continued to keep a high pace, showing stable arrivals in the top five. As a result, Elizaveta Shestakova’s crew took the lead on the results of the second day of the regatta and made a serious bid for victory before the decisive race day. ZIDart Sailing Team finished the day in second position, and Vadim Filatov’s PEC: Sport team rose to third place, making a rapid leap to five positions in the ranking. With a minimal lag and good chances to catch on to the prize place, the teams Kalina Racing Team, “Russian Bogatyrs”, Tenzor Sport, ELF/Hubex, Tenzor Legal finished this day.

The fate of the prizes was decided on the final day of the regatta. On Sunday, the weather played a cruel joke with the participants – a weak wind came to the water area and immediately turned sour, not allowing the races to be completed. Only three races were launched during the whole day, but it was these races that became decisive for many participants of the Tenzor International Cup 2022 series.

Zoran Paunovich, ZidArt Sailing Team: “I have an international crew: there is a German, Russians, and I am from Serbia, and we perfectly match the name of the competition. My team members are the most experienced racers, some of the best, world champions and participants of the Olympics. Although this is not the main line-up, but together we have been racing for quite a long time. Now I’m very happy, but I’m so tired that I haven’t fully realized the victory yet. We persevered towards this result, there were difficulties, and today is especially tiring: we spent a lot of time on the water without racing, constant waiting and cancellations frayed a lot of nerves. But it’s over, we won, and I’m happy. All the rivals are strong, it’s a great joy to race with them. There would be no them, and there would be no such pleasure now and the victory would not be so sweet. The third stage of TIC is ahead, and we will try to perform no worse“.

Luck, skill and excellent teamwork led the team of “Russian Bogatyrs” led by Igor Rytov to the top three winners.

Tenzor Sport, Kalina Racing Team, PEC: Sport, Tenzor Legal, Russo Trans, ELF/Hubex and NORD completed the race in the top ten. And these teams still have every chance to be on the podium and claim the prize fund of the regatta at the end of the season.

The debutants of the second stage perfectly managed to set the pace during the regatta and impose the fight on famous rivals. The crew of Gazprom Burenyie, which took 12th place, showed good results, the Skolkovo Sailing Team performed well, which finished the regatta in 16th place.

The next meeting of the participants of the  Tenzor International Cup 2022 Series will be held from September 8th to 11th.